In the northern territories of the Eastland, a small party on horseback gathered on a hilltop beneath a dull descending sky; below them, and for as far as the eye could see, a slaughter was underway of men, women and children. The crackle and roar of burning homes and flesh, accompanied by the clamour of terrified livestock and the unceasing cries of those dispensing the terror, only added to the mournful chorus of human despair that fouled the air. 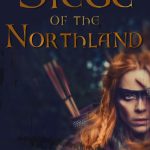 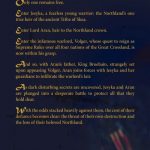 Siege of the Northland - Extra Bits

Here you will find some odds and sods of information about the ideas that went into bringing Siege of the Northland to life.

With no experience of writing either a script or a novel, my sole desire was to produce an action-packed adventure story with elements of the fantastical woven throughout. Because I saw this, in my mind’s eye, just like a movie, considering a script didn't seem such a bad idea. Also, surely, it would take less time!

Besides, I already had my heroine, who, I imagined, would happily travel (Outlander style) between two time zones; although I was thinking more specifically that the transference of time and place would be instigated by the reading of a book: in the vein of Neverending Story and The Princess Bride.

What I hadn’t reckoned on, because I didn’t know at this early stage of the game, was the style of writer that I was destined to become: a pantser – more elegantly known as intuitive. Simply put, you have a vision (of sorts) - together with a few key scenes - a quest - a location - a couple of really strong characters and… well, you just fill in the rest as you go!

Clearly strong words ‘to self’ were needed: ‘if you’re going to do this properly, listen to your intuition which is now clearly telling you that a novel is required, accept it’s going to be a slog, there are no shortcuts, and get some professional advice.’

Needless to say, I didn’t listen, which resulted in a paper copy being discarded in a drawer somewhere. It was years later that an overpowering sense of ‘unfinished business’ between the two of us, led me to snatch it back from oblivion.

With the time travel element ditched, alongside the safe, 9 to 5 job, work began in earnest in late 2014.

“Writing a book is a horrible, exhausting struggle, like a long bout with some painful illness. One would never undertake such a thing if one were not driven on by some demon whom one can neither resist nor understand.”
- George Orwell

Winter Warrior – Book Two in the Northland series continues
the adventures of those fearless Northlanders who survived the
action in Siege of the Northland.

Smith & Greenway: Victorian Detectives
– is a foray into the world of historical adventure.

When fate throws Arianna Greenway and Captain Josiah Smith together, necessity draws them into an alliance built upon deception and desire...